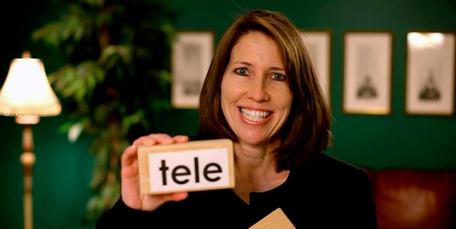 Welcome to the Latin and Greek Roots Challenge.  It is my guess that you, too, believe, "With education, we can all make a difference!"

Many people have asked how the Latin and Greek Roots Challenge came to be.  Let me share with you highlights of the story and take you back to the beginning …

A Note from our Founder

​I have always had a fascination with education and, in particular, wondered why it was that inner city schools were underperforming, while children from the suburbs seemed to do so much better.  Why is it that we, as a society, struggle with reaching every child?  I also looked forward to the yearly magazine articles highlighting which schools had earned the top SAT scores.  It seemed to me that a common characteristic of many of the top performing schools was that they contained “Latin” in their name.  I was always curious why Latin gave these students an edge in their academic performance?  I was also struck by the importance of Latin in the education of theologians and priests.  A seed had been planted ...

As time passed, children came, and life became very busy.  Like most parents, I wanted to make sure that our children were getting the best education possible, and that each child was being appropriately challenged to reach her maximum potential.

A few years ago, upon meeting with my oldest daughter's teacher to see what we could do to add more challenging material to her school day, I finally came to the realization that teachers are overwhelmed.  It must be exhausting, not only working with each student and trying to meet his or her individual needs, but also working with perhaps as many as twenty-four sets of concerned parents.  How can a teacher truly reach them all?  I came to realize that in order to advocate for my daughter, it was important that I did not just focus on her, but that I made sure I advocated for all students.  The question then was, "How?"  Another seed planted ...

During the same period of time, Latin and a Classical Education became a frequent topic of conversation among friends and parents at our children's school.  Although I was convinced of the importance of these subjects, I did not believe that I could be a catalyst to provide this education at my children’s school, because I lacked the background and experience in Latin.  I was searching for some way, besides teaching, that I could expose my children and their classmates to Latin and to the impact that it has on academic performance.

Then, a friend, who knew of my passion for education, brought over the movie "Akeelah and the Bee", written and directed by Doug Atchison, for a family movie night.  As I watched the movie, I was so moved by its message that education makes a difference no matter where you come from.  I was also struck by how the college professor coaching a young girl for the National Spelling Bee emphasized the importance of knowing the etymology of words and the languages from which they were derived, especially Latin and Greek.  Another seed planted ... and beginning to take "root".

I cannot remember if weeks or just a few days passed, but I awoke one Saturday morning with "the idea".  With great excitement I told my husband, "I think I've got it.  We can teach Latin and Greek roots as they did in "Akeelah and the Bee".  While it is not the same as teaching Latin or Greek as foreign languages, we can help students understand the connection between the roots and the English language.”

The next thing I knew I had scheduled an appointment with our principal to discuss afterschool enrichment programs, with Latin and Greek Roots being my first priority out of about fifteen other ideas I had.  (We parents must drive principals and teachers crazy!). From the time that I scheduled the appointment to the time that I met with her on June 8, 2010, I had already decided in my mind that the Latin and Greek roots program could not be just an afterschool enrichment program.  I felt it was so important to expose all students to Latin and Greek roots, rather than just those who were lucky enough to attend an afterschool program!  I had to find a way to incorporate Latin and Greek Roots into the school day, allowing ALL children the benefit of Latin and Greek roots, the foundation of over 60% of our English language and over 90% of the vocabularies of medicine, law, science, theology, and technology.

When I finally met with our principal, Karen McLaughlin, she was gracious enough to listen to all of my "ideas", but she also believed, as I did, that Latin and Greek was important enough to be incorporated into the school day.  Karen listened to my idea of a Master Board to enable the whole school to participate, from Pre-K through Grade 8, and my idea of three roots being presented each week.  I then showed her my prototype.  She told me, "If you can get other parents interested in the program, and as long as it doesn't put any burden on my teachers, I will incorporate it into the school day beginning in September."  We continued to discuss the remaining enrichment ideas, but I was truly excited that she would give us an opportunity to bring Latin and Greek roots into the school day!

Within a day or two, another mom and I were out on the playground with my "Master Board" trying to get as much feedback as possible from parents and students.  As my heart had been telling me, parents were interested.  Karen gave us her blessing and, thus, the journey began.

What began as an idea for an after-school enrichment program soon blossomed into a program that was in twenty pilot schools in Massachusetts, Connecticut, and Illinois within 18 months.  We have been blessed with educators, friends, colleagues, and scholars who have put their faith and trust in us.  They have advised us from day one and have given us suggestions, revisions, and additions to help make the program the best that it can be.

We hope that you find the “love and magic of words” will come alive in your children!!

Please keep in touch and let us know your thoughts and suggestions.